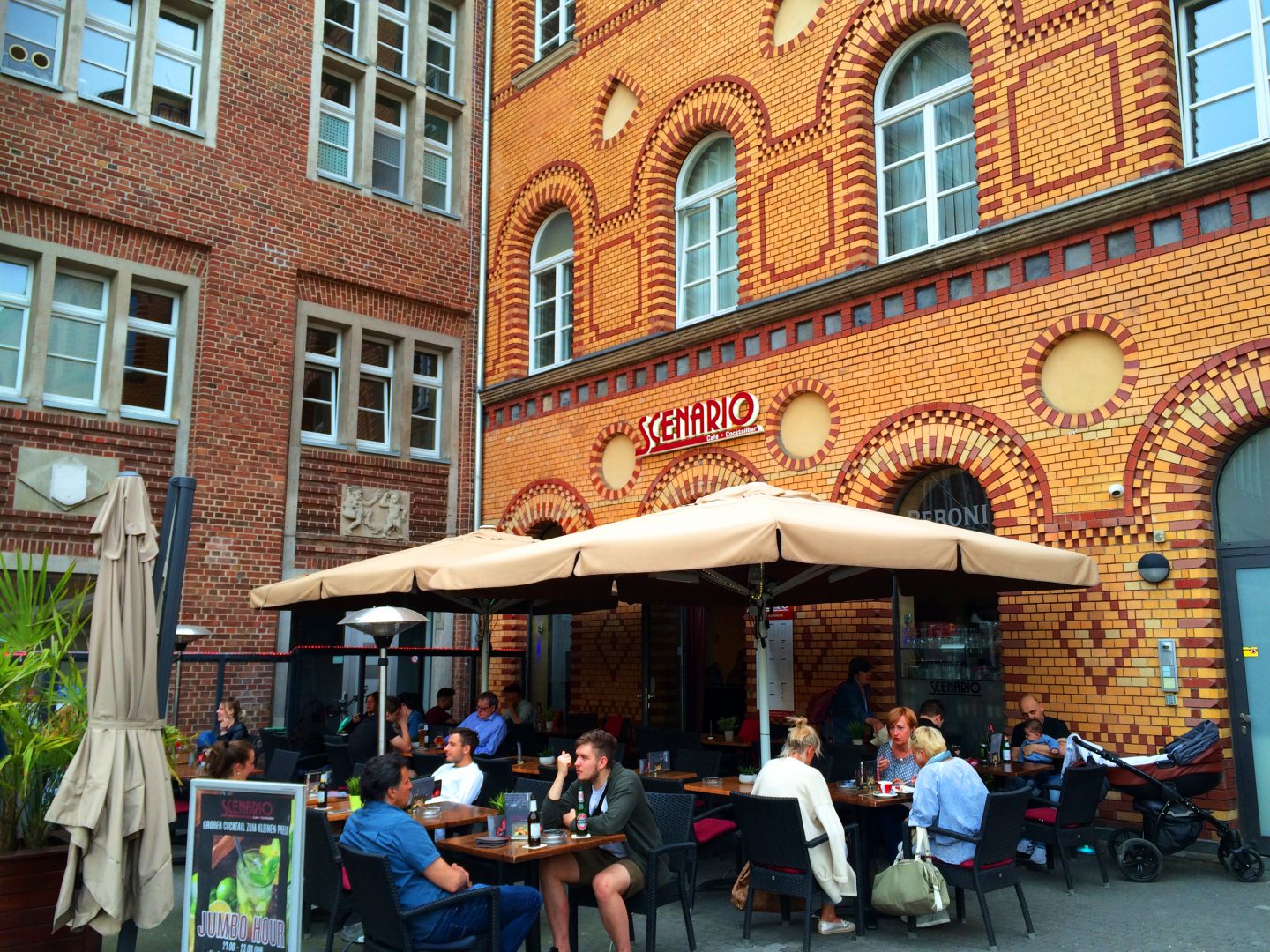 It’s 3am and I can’t sleep. So I thought I might as well write about why.

Last night, well on Saturday, I went to a Eurovision party in Germany. This sounds very extreme, but it was just over the border from Maastricht. I took the bus there which took about an hour and met up with friends in the city of centre, to have some chill time before the party.

a little terrace to sit at and had a cocktail. Being a bit peckish, I also had a Flammkuchen which is an ‘Alsatian dish, speciality of the Alsace region and neighbouring areas (northeast France, south Germany), composed of bread dough rolled out very thinly in the shape of a rectangle (Traditionally) or circle, which is covered with fromage blanc or crème fraîche, thinly sliced onions and lardons.’ It was inoffensive. Next we took the bus to the venue, which was not far. The apartment was sooooo cool and full of amazing quirky pieces of art and furniture. It felt like being on a tropical island if I’m honest. The living room featured barber chair seating, a juke box, and a little love nook punctuated with big fluffy cushions and a fireplace. The kitchen overlooked the room, and was pretty much a fully stocked bar. With every glass you could ever need hanging from the ceiling, and exotic bottles of on proud display along the top, it was actually amazing. Very happy that I had the privilege of attending.

The show was starting at 9, so we had about an hour of exploring the house and mingling before the big moment. There was an awesome projector set up at the party venue, it felt just like home.  We got settled in, prepared our drinks and then it was time.

In the past few years I have got increasingly invested in Eurovision. It’s just so much fun. All these crazy big dramatic performances from all over Europe and more recently Australia. Smoke machines, fireworks, crazy props and costumes. What’s not to like?

Last year, I hosted a little party at mine, so this year it was nice to sit back and relax as the guest of someone else. We watched the broadcast in German, so it was slightly sad to miss the scathing commentary of Graham Norton, but fortunately the audience at the party are pretty much all comedians, so there was no lack of laughter and satire throughout the show. There were so many good songs this year, it was really hard to place a bet for the voting time.

I loved so many, it would probably be easier to list those that I didn’t enjoy, but why focus on the negatives. Austria, Czech Republic, Sweden, Israel, Denmark, The Netherlands, Ireland all amazing! Hungary, loved. The staging of Moldova I also thought was incredible, but the song eh, not so much. But the stand out in my eyes was Australia. Fronted by Jessica Mauboy, who I’ve adored since seeing her in The Sapphires, brought so much energy to that stage it was amazing. No gimmicks, no props, just her and the song. She looked so freaking happy to be there performing, it was hard not to be over joyed just watching her. She incorporated traditional dancing into her performance and it was genuinely a joy to behold. Would definitely recommend giving it a watch if you missed it!

There was a lot of flack about the winner, as there often always is, but I really did enjoy Israel’s contribution. The song is different and without a doubt catchy. A worthy winner. Another great year for the song contest and as always, looking forward to next year.

We hit the sack at about 3:30 and a mere 5 hours later, were at work. It was a very tough shift. Brightened only by everyone’s support for one other at this difficult time. Jessica’s ‘We Got Love’ and other hits of the night before also helped me through. I vowed to go to sleep as soon as I got back home to my bed, but alas, I cannot and here we are.

Did you watch the show? If so, what did you think and who were your faves?