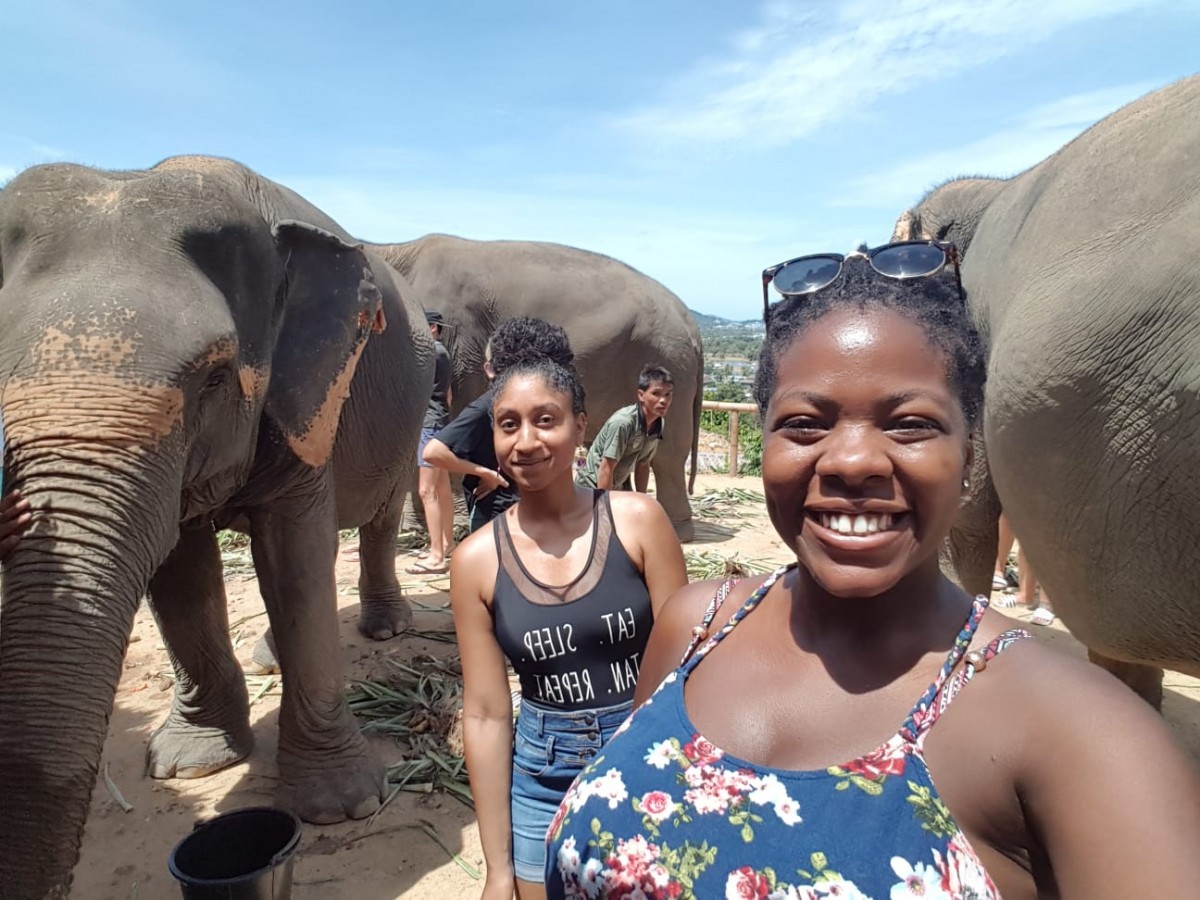 My first night in Thailand I was conked out by 11 and slept soundly. The bed at the Marina Phuket Hotel was sumptuous and the sheets were soft as silk. I awoke at 6am and it quickly became clear that my sleep was over. I did some productive reading, watched YouTube videos and got in some of my audio book all before 9am. The early bird really does catch the worm.
I was ravenous and more than ready for food by the time Lauren awoke. The breakfast buffet at the hotel was more than plentiful. We were guided to our seats, and I promptly headed to get a plate to fill. My first breakfast consisted of rice, chicken sausage, vegetable masala, egg, potatoes fruit and veg. An interesting mix for sure, but every bit delicious! The photo below isn’t of the breakfast just described, but rather a reference picture of a breakfast, so you can see how friggin’ cute and dinky everything was. Day Out to the Phuket Jungle Elephant Sanctuary

After breakfast it was time to get ready for our excursion to the Phuket Jungle Elephant Sanctuary. We donned bathing suits and clothes, packed our bags and grabbed towels from the front desk. We met two lovely South Africans in the lobby who were also heading to the sanctuary. Transportation to the sanctuary was in a traditional taxi through the busy city streets, and winding rural roads of Phuket.
Ours was the last group to arrive at the Elephant Sanctuary and so the session kicked off promptly after our sign in. Once settled, are taxi cohort of 8, and a further 25ish attendees were given an informative talk about the Sanctuary and their work, and the current conditions working elephants face in Thailand. The itinerary for the day was provided and then it was time to get up close and personal with the beautiful animals. We washed our hands, and headed to the collect bananas and sliced watermelon which we stacked in our own individual buckets. We would take these to feed the elephants. A short walk uphill, and there the elephants were eagerly awaiting feeding time. Seeing them up close was so incredibly surreal to me. Being very much born and bread in the city, allergic to all the pollen, and terrified of anything that crawls, I really don’t spend that much time outdoors. So, looking into the eyes of an actual elephant standing less than a foot away was an amazing feeling. Then, that elephant reaching for the watermelon in my hand with its trunk?! Insane!! We fed all the elephants and marvelled at them under the beating sun. I was in my absolute element. I love this picture because it looks like we’re having a great conversation! This beauty was the oldest elephant at the sanctuary. Next up, mud time! We got changed to reveal our bathing suits and then headed down hill to the mud spa. Sadly I don’t have any photos from this point on, but hopefully my words will help paint the picture. The elephants were led by the crew one by one to frolic in the sludge. Here, we petted the animals more, rubbing them with mud, and getting splattered by swishing tails. We were also smothered in mud by the smiling sanctuary crew. After getting dirty, it was time to get clean! We descended further into the enclosure where there was a small lake. We were given brushes and little buckets to collect water in, so that we could help to clean the mud off of the elephants. Some were eager and headed straight in to await the elephant’s arrival, ready to scrub. Whereas others (including myself) were more cautious, allowing the elephants to enter and settle first before wading in! Part of the elephant’s bathing technique was to lie down in the water, basically by rolling over to one side, so whenever one seemed to be teetering we moved out of dodge sharpish!
After their bath, we got clean ourselves in the showers. I must commend the sanctuary on their fantastic facilities. Up a small staircase from the main room was the washroom. It featured perhaps twenty stalls, all spacious, kitted with a toilet, shower and basin.
Once washed and changed it was time for food! Described as a buffet, I was skeptical of what would be an offer as I always am, but a true spread was laid on for us all! Rice, potatoes, Pad Thai (my new favourite), vegetable curry and many more delicious things!!! I ate till I was full and at this time the staff informed us also where we could find the photos they’d so kindly taken of us throughout the day. The experience ended with us being gifted a beautiful Karen shirt so we could remember our time at the sanctuary.
Visiting the Phuket Elephant Jungle Sanctuary was such an incredible experience and a huge learning curve. Getting to find out all about the elephants, their habits, their lives, and what we can do to protect them. Furthermore, it was truly unique to be in the company of such majestic animals. I would highly recommend a visit to this sanctuary if you visit Phuket. After relaxing for some time in the hotel that afternoon, we hit up Bangla street for our first taste of Thailand’s night life. And what a show it was! As soon as you enter the street you are bombarded with a cacophony of noise and colours! Music blasts from every crevice – a great mixture too! A lot of Chart Hits and Hip Hop. And all of the bars and clubs are illuminated by flashing lights!
Outside each bar there are crew, who will jump out at you with price lists and promotional offers to try and entice you into their bar. We’d been recommended Illuminate, but as we got there quite late in the evening, we thought we’d save the big cahuna for another night so we could enjoy from beginning to end.
So upon, checking out the whole street, we opted for the Tiger nightclub up a small staircase, and I’m glad we did. The venue truly was something else! First off it was huge, which might actually be a bit of an understatement. On one side of the room was RnB/Hip Hop, and as you descended further into the hall, pop music was being played on the other side. I loved the way you order drinks there. I don’t yet know if it’s the same in every club, but at the bar there’s a clear drinks list. You can make your selection being fully aware of the price, unlike in London were you just ask for what you want and hope for the best. Then you order your drink at a till, the cashier collects the cash, and gives you a receipt for your drinks which you then hand to the bar man and hey presto! You’ve been served. An incredibly efficient and pleasant experience.
The club played a huge selection of music ranging from Hip Hop to Reggaeton, all the way to Bhangra. We soaked up the atmosphere and cocktails until we retired for the night.
Next Day // Boat Tour to Phi Phi Islands