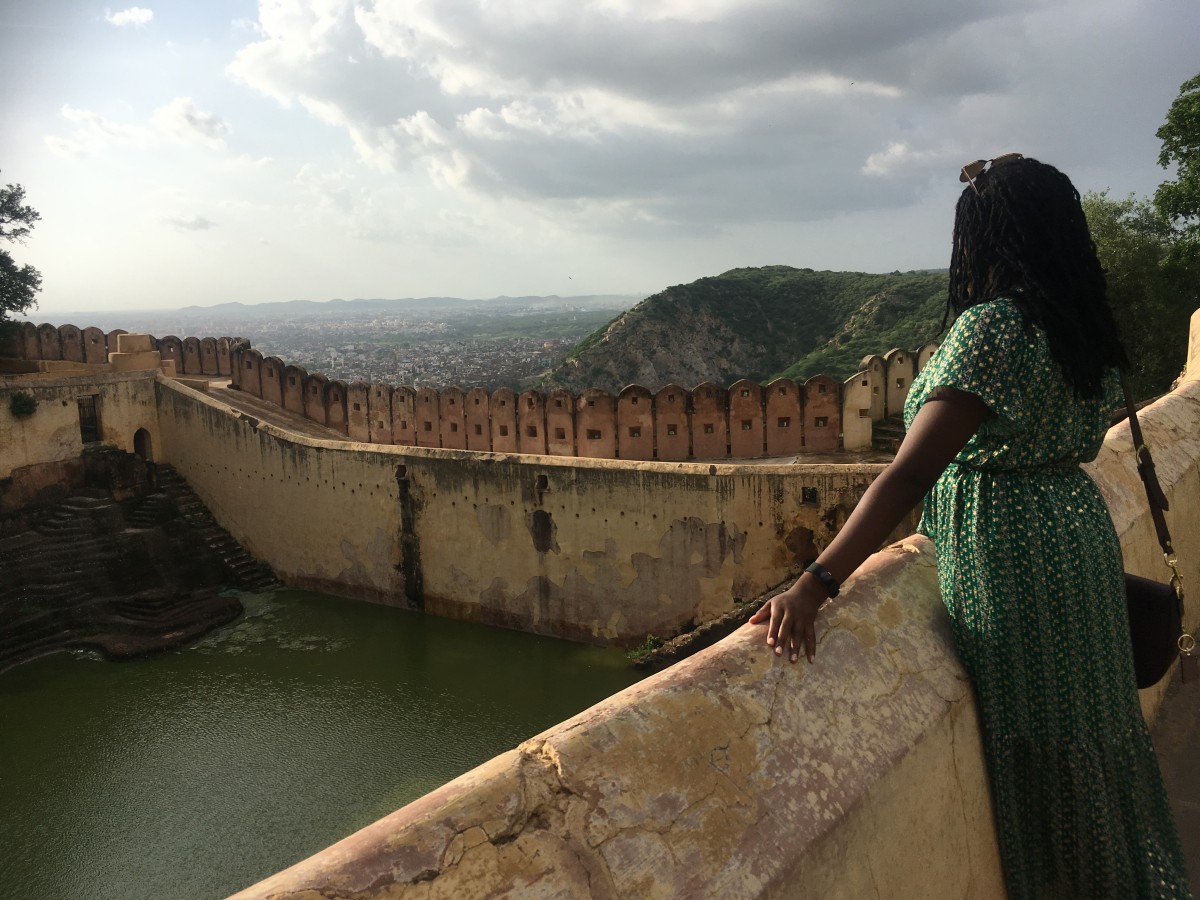 We went sightseeing for 1 full day in Jaipur. Cramming the itineraries of all the blogs we’d read into one fateful day. Which just so happened to be perhaps the hottest day I’ve ever experienced in my life. Being a child of the sun, I often give it ‘all that’ about loving heat. But this heat, it did not love me boy, no it did not.

Our driver for the day was Raj; Samir’s uncle who we had met the night before driving back and forth from the Pearl Palace Heritage Hotel to the Pearl Palace Hotel. He had a lovely new air conditioned car that provided much needed rest bite to me between landmark stop offs. Raj, being from Rajasthan, and a driver for many years, knew everything there was to know about the city and was happy to share with us.

We had a plan of the places we wanted to cover for the day which he was happy to accommodate. Into our schedule he also introduced some stops, which whilst we weren’t anticipating, or necessarily desiring, ended up being quite interesting.

We kicked off at Stepwells, where in the most coincidental turn of events, Elodie’s (the bride’s) mum spotted us! As we were preparing to leave, a kind looking woman approached us in the baking sun.

It took me a beat to clock why someone might be asking this, and how they could possibly know this, before the lady introduced herself. Then everything was clear, and we were grinning from ear-to-ear, and introducing ourselves to Mama Crenon, and the rest of the family. The Crenon sisters and Papa Crenon emerging from seemingly nowhere!

Next up, Amber Fort and Palace just a short drive away.

We then took a break for lunch, having spent about an hour at the fort taking in the sights and fighting off salesmen. The restaurant, recommended by Raj, was one of the cheapest and best meals I had in India. We had a modest vegetable curry and chipatti’s to share – simple, honest and delicious. Just what we needed to keep going.

After that a quick stop off at the Pink Palace!

This great landmark – so blogged about – is located on a very busy road. On the opposite side of the road – where we stood to take these photos -the street is lined with market stalls to catch all the tourists that come by to see the rose sight.

Literally as soon as we stepped out the car, Raj having whispered to us, “don’t buy anything”, men emerged from their stalls like crabs from beneath rocks. All shouting louder than the last to entice us into their shop. My discomfort at this, is what inspired this very awkward pose, scratch that, stance below.

The biggest shame about it, is the stuff on the stalls was hands down the nicest things we saw in Jaipur. Whilst the prices were surely boosted for tourists, they were beautiful and still would have been really reasonable prices when converted to our own currencies. If I had my time there again, I would have ignored Raj, sucked it up and gone into the stalls.

I got a much better photo of this building later in the day as we sped by. My last photo before my phone died, I kid you not, was this. Can you believe it?

Our next stop was City Palace. Where we experienced some confusion over which ticket to buy. There are three tiers – 700 rupees, and then a massive jump to 3,000 or 5000 rupees. Miwa and I wanted to go, but possibly not that much!

The ticket man was less than forthcoming about what each ticket included. It was unclear if the cheaper ticket permitted you to see any part of the palace, or if it was only entry straight into the museum. Fortunately, for us, another tourist who had visited before was coming to buy a ticket at the same time and told us the 700 rupee ticket was all we needed.

As we took photos in the little corner overlooking the palace, a hoard of people followed us over and circled us, waiting to sell to us. It was in moments like this, I was so glad to have Miwa by my side. This trip was certainly not one I could have taken solo as in instances like this I’d feel incredibly intimidated. Not that anyone meant us any harm, they certainly didn’t. I just personally found it unsettling at times to be crowded by so many people all trying to get my attention at once and sell me things.

In this day, we got so used to saying ‘No, thank you’ to people, we’d end up saying it to things we actually did want.

After the water palace, it was our first unscheduled stop of the day.

We had to scale a large puddle and hoard of flies to get there, and were then handed off by Samir to the manager of the factory.

He took us through the process of block printing, and fortunately Miwa and I found this very interesting. If we had been the kind of people who detested block printing (I don’t know who these people would be, but I’m sure they exist) this tour would have been an absolute drag. But for creative duo, Matsuo and Gray, we absolutely loved it!

After the tour, it was the time we knew would come, but were also dreading – sales time. This gentleman was actually my favourite of the day, as whilst his passive non-forceful sales manner was very well-done, it was still very clearly a sales technique. Making you feel so comfortable, and so welcomed, that when it was time to refuse purchase, you’d feel too guilty not to buy something.

Disclaimer: I want to be clear that whilst everyone had their different methods of selling, and these did provoke different levels of comfort within me, I whole heartedly knew, that no one meant any harm. Everyone’s just doing their job, as Lydia Dinga would say ‘money haffi mek’, and we all need to hustle to eat. Some of these ways of hustling were only unsettling to me in some instances, because they were so foreign. I can’t really say that I frequent any market’s back in London. If I had, maybe it wouldn’t all have been such a shock to my system.

In the backroom of the textile factory was the shop. The floors were lined with red carpet, and walls stacked to the rafters with material, the store was reminiscent of one of the clothes shops back in Lajpat Nagar.

We were offered a seat, and what ensued was the most well-rehearsed presentation of textiles either of us had ever seen. I wish we’d captured it on camera as I don’t even know how to begin trying to describe it well.

With some creative excuse making we were able to get out of the Textile factory sans purchases. At this point, my head started full on banging. Raj explained in the car, that there was an incentive to him taking us to these places. We didn’t need to buy anything if we didn’t want, but for looking he would get a gift. Again, we weren’t mad at this. And after speaking with more friends since our return, about tours in India and other countries, this seems like a customary thing to happen on tours. It’s all par for the course.

The other two stores Raj took us to were jewellery stores. The presentations there followed a similar structure to the textile factory. Firstly, we’d be shown a segment of how the jewellery was made; Workers were typically cross-legged on the floor in quite dark, hot, dusty conditions. Then we’d be taken to a gleaming show room, bright, cool and well-lit to show all the polished gems in their best light.

This stark contrast was kind of representative of our travels in India was in general. The line of demarcation between the haves and the have-nots is apparent. Even walking around all the palaces of earlier in the day I couldn’t help thinking about the all the hundreds of thousands of people who had built these magnificent structures, and how their lives must have differed so grandly to the Maharajas that actually lived in them.

Nahargarh Fort was our last stop of the day, and my absolute favourite. It was so beautiful up there looking down over all of Jaipur. Listening to all the noises, the cars beeping, music playing, the sounds of the city all merged together from our vantage point at sun set point to create this incredible soundtrack that we could have sat and listened to for hours. It was really stunning.

We finished the day at Niro’s. A restaurant recommended by one of Miwa’s friends from back home. It is a highly reputable restaurant, and thus was our most expensive meal – comparable to any London meal out.

Again though, expensive or cheap, you know what I’m going to say – the food was delicious! Here we split a chicken kebab, veggie curry, naan and chapattis. I washed mine down with some sweet lime juice, and Miwa, a sweet lassi.

We were completely spent after this day. We left our hotel at 9:00am and didn’t return until 10:00pm! We slept soundly knowing tomorrow would be a much less strenuous day – first up would be a long drive to Agra, and then the pièce de résistance – visiting THE Taj Mahal.